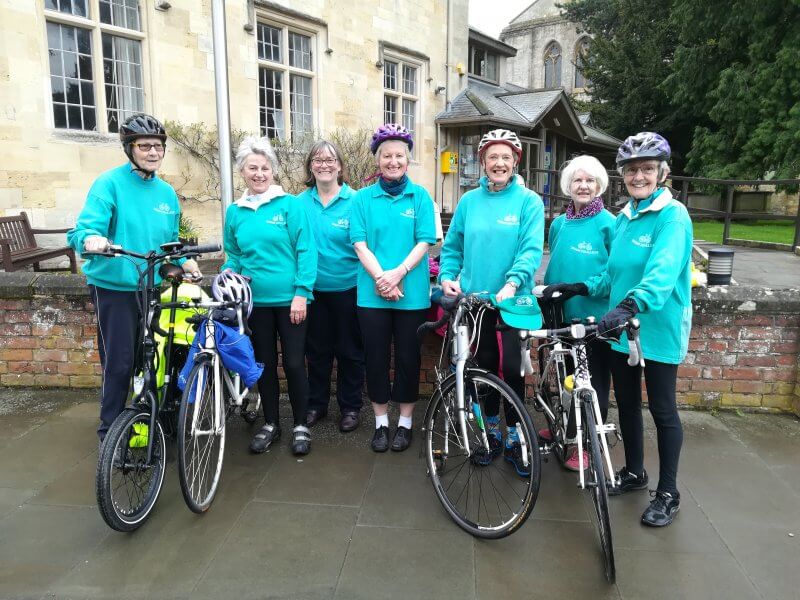 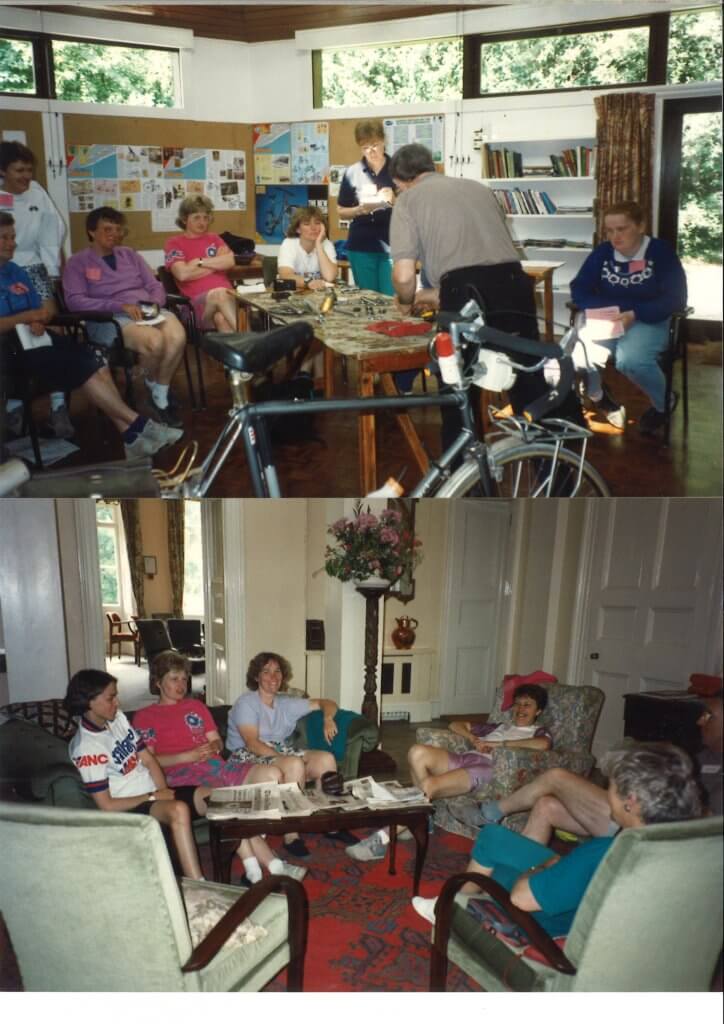 It all began at Denman in 1993, when Gordon and I were tutors for the first-ever ‘Safe Cycling and Bicycle Maintenance’ course.

Eleven brave members of all ages turned up with an assortment of bikes, to spend four days taking bicycles apart in the garage, chasing ball bearings across the floor, removing and replacing chains or mending punctures.  ‘Cleaning greasy hands in our bedroom before lunch, we managed to squirt green washing-up liquid all over the bathroom.’ (Karen)

Afternoons saw us all riding around the countryside.  Group riding was a new experience for some, demanding consideration not only for members whose speed and techniques were varied, but for other road users.  ‘Some of us were delayed by a strong wind that caused a small whirlwind in a hay field.  Then Karen’s chain came off.  She turned her bike upside down and everything fell out of her saddlebag.’  (Julia)

‘A much-needed break from looking after children.  Fun and friendship in plenty, support when needed and the beginnings of a new approach to leisure.’  That’s how one of us remembers, after 25 years, her week at Denman.  (Clare)

It was thanks to the students that the Derailleurs was formed, that we began to have reunions twice a year based on the ten homes of people living in widely scattered parts of England and Wales.  Hosted by WI members, we met and cycled in North, South, East and West, where children, husbands and friends joined us for day rides and evening meals.

Wearing our new green ‘strip’, we were easily spotted by whoever was leading the line or bringing up the rear.  That was usually Gordon, who regularly adapted his speed to the slowest of us.  ‘No matter what you taught us, we need you to come to the rescue if we break down,’ they said.  He was sometimes the envy of other men as he sat drinking with several ladies younger than he was. 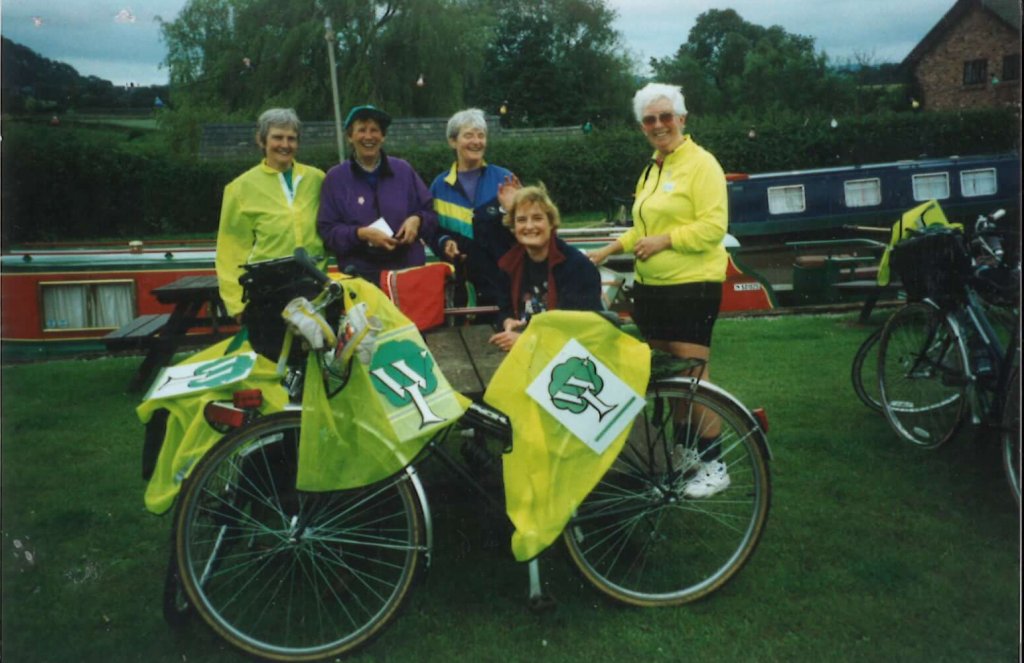 They all feared that Wales would be mountainous, though we made good use of our former railway line cycle track along the valley side.  Then we found with a shock that Northamptonshire was even more hilly, walking was needed, but we still had enough energy to play skittles in the pub later – ‘that became a more dangerous pursuit that cycling.’ (Diane)

Advice about safe riding in a group was abandoned on our way up the edge of the Chilterns towards Berkhamsted, when two speedy lycra-clad men shot past us at the moment when the hill had become too steep for most.  Then a streak of green flashed by, as Diane got into racing mode.  Cheers for the DD’s champion as she overtook the men, leaving them wobbling in surprise.

Evenings at Denman were spent in map-reading, route-planning, discussion about waterproof gear and answering questions on technical matters.  Then came our last session together, followed by entertainment the like of which fellow students of the Bridge, Craft and Cookery schools had never before seen.  Creative cyclists presented a Fashion Parade never-to-be-forgotten, making use of shorts, capes, sun hats, fleeces, tools, black plastic bags and road safety cones.

Now we are twenty five years older.  We have all moved on, having new bikes according to our needs. Severally, we’ve led our families and friends into healthy activities, taught schools Proficiency Cycling, become Sustrans Rangers (Angela and Margaret)), ridden tandems with visually impaired people on Guide Dogs holidays (Gordon and Marguerite) and raised money for two Denman College Appeals (Gill and Marguerite.)    We’ve been nearly blown off our bikes in Lytham St Annes, completed the North Sea Route (Margaret), toured extensively in UK and Europe, ridden hired bikes into the Selkirk Mountains, USA and tackled a Tour de France climb or two. (Diane)

In 2004, families now being old enough to stay at home without us, we allowed husbands to accompany us to Germany, Fourteen of us filled a small hotel in Schleswig, where we hired bikes (beware the back-pedalling brakes) and rode alongside the Schlei fiord.  Blessed with sunshine all week, we took a ferry out towards the Baltic, rode back along well-marked tracks, saying ‘Moin Moin’ to all we met, that being the local greeting.  Our German was sufficient to get us by when we had tea with friends of friends, meals either in-house or at a nearby tavern, the Sentor Kroog in the Rathaus Markt.  It was there that, the men being bunched together in earnest men-talk, Karen said, ‘Well, how did we decide who we would marry?’ It was perhaps just as well that the men did not hear our replies. I know we all laughed a lot, but mine is the only reply I can remember.  ‘I liked his legs  He does  not have knobbly knees.’

Denman brought us together and we have just celebrated out Silver Anniversary, gathering in Tewkesbury, seven of us with a lot of two-wheeled memories.  We managed only a short ride because of wet and windy weather, but there is plenty to see in this historic town and we had much to discuss over tea, cake, wine and food.  We toasted Gordon, who died in 2012 and GIll, who could not be with us this time.  Mary, our oldest member, who in 1993 arrived at Denman having cycled from her home near the river Severn, is now in residential care, but we all drove to Oldbury to take her out to lunch on Sunday, after first making ourselves known in Tewkesbury Abbey.

Here’s to the next 25 years, Denman and the Derailleurs! 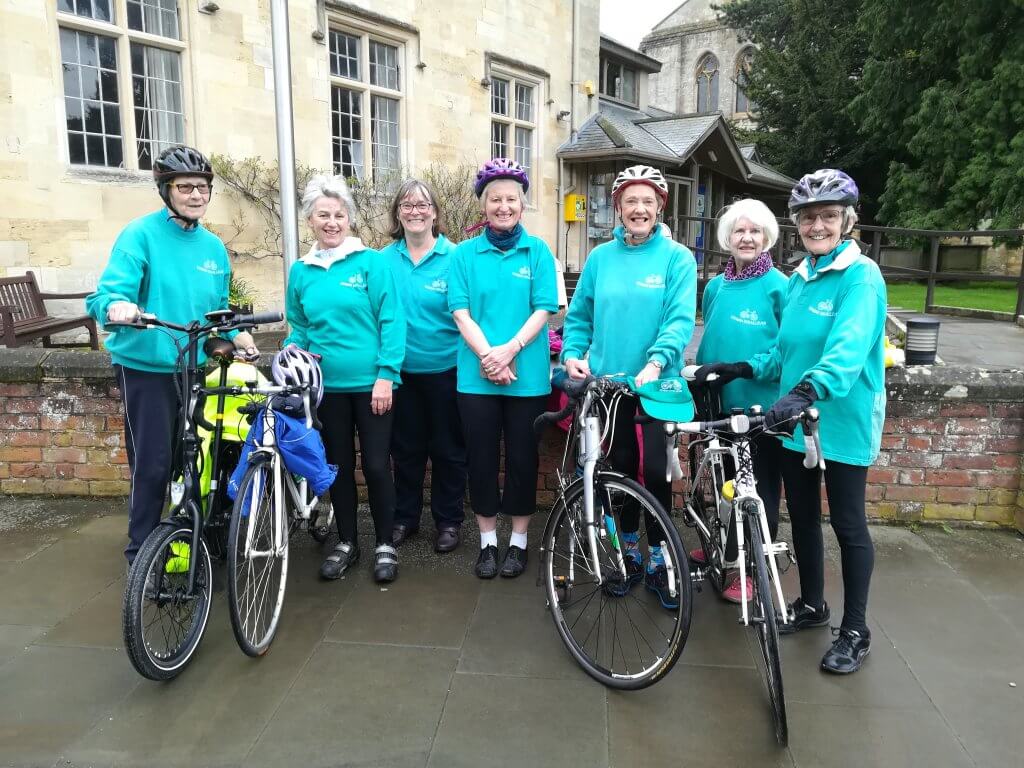 With thanks to the Derailleurs for the stories, photos, memorabilia and above all, support of Denman for the last 25 years.